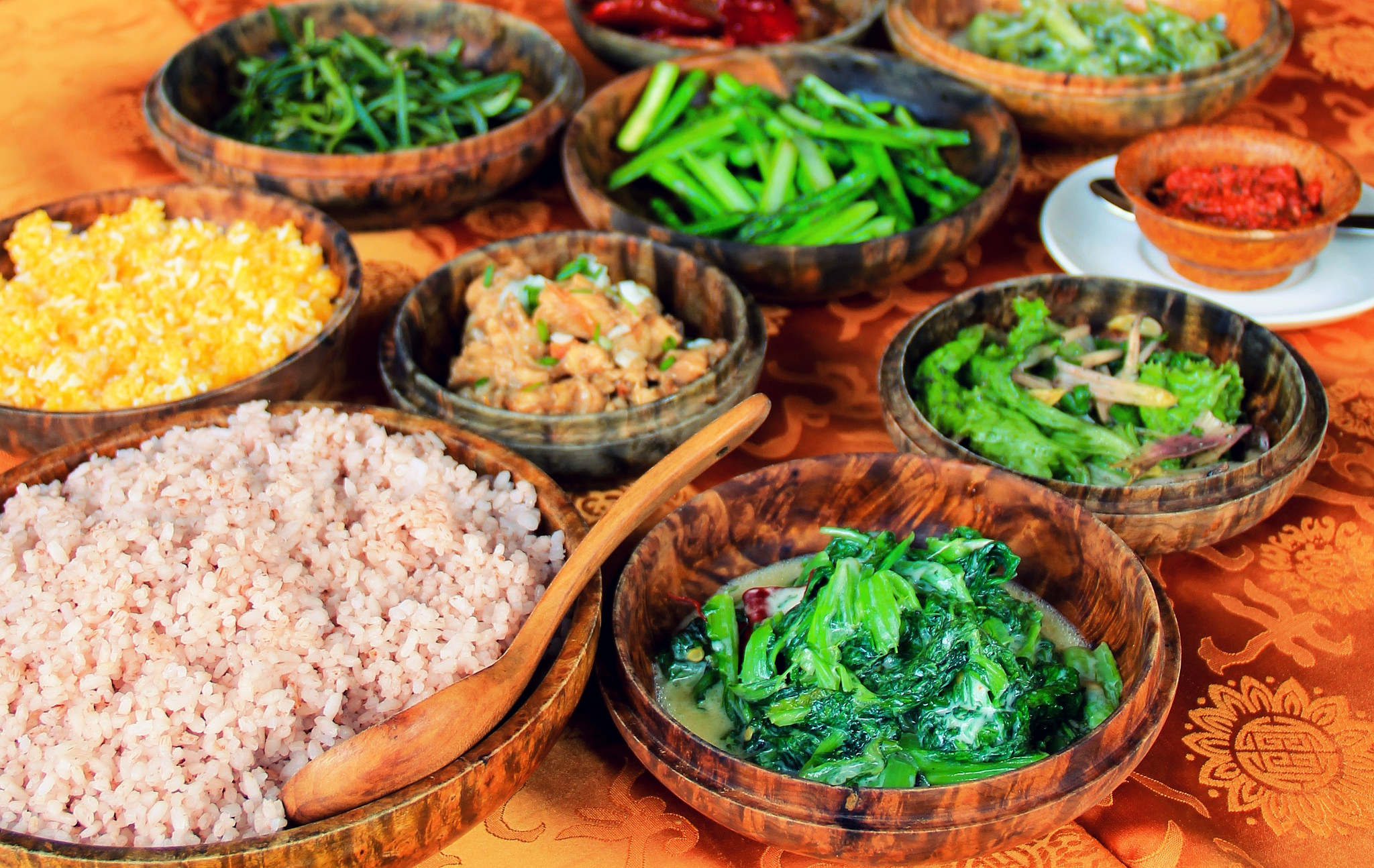 Traditional Bhutanese cuisine reflects the simplicity of the Himalayan way of life.. Bhutan’s environment, culture and history have all played significant role in shaping the country’s incredible cuisine, which is full of unforgettable flavors.

Most meals are simple, native to the region, easy to prepare, and largely comprised of ingredients from the area. The spiciness of Bhutanese cuisine is it’s most distinguished feature.

The foods are typically spicy to stay warm in the chilly cold conditions of the steep mountainous scenery.

The spiciness of Bhutanese cuisine will fill you up with warmth that can only be matched by the hospitality of the Bhutanese people.

Ready to treat your palette to Bhutan’s most popular cuisines? Read on to learn what to expect from different regions of Bhutan during your trip to Bhutan.

In Bhutan’s west, the meals tend to be heavier due to the colder weather, with the most common ingredients being chili, meat, and dairy products.

Rice is a staple regradless of the region and red rice is especially well-liked in the west.

There is also a significant Tibetan influence, and foods like momos and thukpas, dried meat from from livestocks and , buttermilk are frequently consumed with these dishes.

The well-known sikam, shakam, or yaksha pa is a must-try for anyone traveling there. The iconic  Ema Datshi is the most frequently consumed dish in the western region.

Depending on the ingredients and how they are made, ema datshi can be mild or blazing hot.

The most authentic versions are made with mostly chilies, fermented cheese, and a bit of seasoning.

While it is typically cooked with chiles and cottage cheese, it can also be made with meat, and vegetables like potatoes, and mushrooms. Ema datshi  is delicacy that you must-try  during your Bhutan Trip.

Eastern Bhutan is vast and widespread; the kingdom’s largest district is in the east, and portions of its borders extend just beyond the edge of the Indian state of Arunachal Pradesh.

The fact that maize, potatoes, and other vegetables are farmed extensively in the area is reflected in the food. While the food of the east draws heavily from that of the west, it also has distinct characteristics.

Food are typically simpler here and cured; smoked pork and beef often accompany wheat noodles with a local brew of eggs and butter known as ara.

Bhutan’s closest neighbors, India and Nepal, has a significant cultural effect in the southern part of the country.

The cuisine of southern Bhutan is delicate and filling. Most southern meals are based on rice and lentil rotis, with herbs, veggies, and meats giving a blend of fresh and smokey flavors.

Frequently, meat is marinated, grilled, and served on skewers with pickles, rice, or sel roti. The region frequently serves mutton and lamb with vegetables and ezay (pickles).

Buckwheat, and wheat is traditionally used as the main ingredients in Bhutanese cuisine.

Buckwheat, along with dried meats and dairy products, was the main food source for the locals of Bumthang and the surrounding area since rice cultivation was not practicable there until the early 2000s.

The central region is well known for traditional cottage cheese and more modern varieties like Cheddar and Gouda.

Chili peppers hold a special place in the people’s hearts and on their plates in Bhutan, where they are so revered that they are regarded as a vegetable.

Ema Datsi/Datshi, the national cuisine of Bhutan, is a source of great pride for the locals and is renowned for its extensive use of dried or fresh red and green chilies.

This well-known Bhutanese cuisine, which consists of Ema (Chili) and Datshi (Cheese), has produced numerous different variations, including Kewa Datshi (Potato and Cheese) and Shamu Datshi (Mushroom and Cheese), among others.

The soups and stews here are abundant in vegetables, the most popular being spinach, pumpkins, onions, and turnips.

Vegetable, rice, and lentil soups are a favorite in Bhutan’s High-Himalayan regions because they keep the locals warm during the bitter winter season.

The ideal wintertime comfort is a hot bowl of thukpa and bathup(wheat soup), accompanied by a warm cup of butter tea.

There are several restaurants in Bhutan’s big towns, such as Thimphu, Paro, and Punakha, where you can savor delicious cuisine on your trip to Bhutan. Some of Bhutan’s top restaurants include

Don’t these traditional Bhutanese dishes sound amazing? One of the most enjoyable ways to immerse yourself in a culture is to visit the country and try the local food.

Bhutan’s rich cuisine experience is undeniably different. Experience the absolute accuracy with which the meals are made and the generous hospitality with which it is delivered during your trip to Bhutan.

Book an extraordinary journey for your Bhutan trip today! Keep up to date on the latest travel information with us.
What’s holding you back? Contact Norbu Bhutan Travels for one-stop-shop tourism in Bhutan!