Nature and humans live in harmony

Ecosystem Diversity in Bhutan ranks as one of the most bio-diverse in the world and has an incredible range of habitat.The warm southern foothills support hundreds of wildlife that is usually associated with a tropical-jungle climate. As one progresses north, the biodiversity changes accordingly as the elevation increases.

Bhutan is among the top ten global biodiversity ‘hotspots’. Considering her size, Bhutan has the most diverse ecosystem in Asia.

It is mandatory to maintain 60% of forest cover

The country is blessed with vast forest cover (70.46% of the total land area) which is well-preserved and consists of an extensive network of rivers and streams. You can find wide varieties of landscapes from high himalayan peaks, dense forest and crystal blue lakes to alpine mountains and luscious green valleys.

Due to the vast difference in vegetation, the diversity of wildlife is really impressive.  There are different varieties of wildlife such as tigers, elephants, water buffaloes, black bear, musk deer, jackals, fishing eagles, yaks and many more. 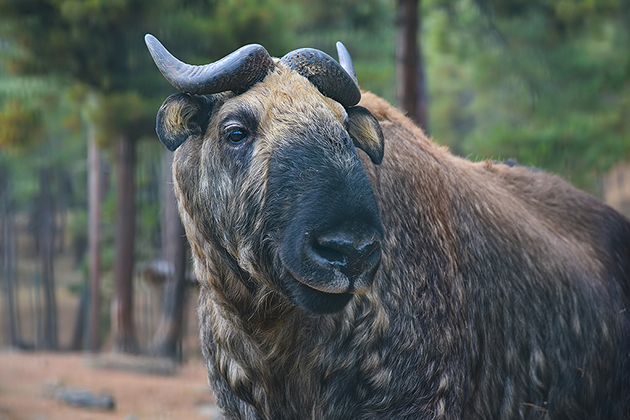 Locally known as Dong Gyem Tsey, Takin is the national animal of Bhutan

The Himalayas are home to some endangered species of animals, which include, the snow leopard, the takin and the red panda. They are strictly protected under the law.

In particular, the country is enormously rich in bird species, with 678 bird species recorded till date. The kingdom of Bhutan is a bird watcher’s paradise. There are varieties of bird species you can find  like the black-necked crane, hornbill and palas osprey.

There are around 5500 species of plants including the beautiful rhododendron species. Tibet, located just above used to call the country as “Lhojung mehjong” – abundance of medicinal herbs available at the south.

The delightful blue poppy is found abundantly in the central and higher regions and is also the country’s national flower.

The more variety, the better society

The country’s rich biodiversity is unmatched and unscratched from the ever increasing pressure from developmental activities. Its values are intertwined with the daily lifestyle of the indigenous people and hold special cultural significance.  The biodiversity conservation efforts put up by Bhutan should be taken as a valuable lesson for all countries around the world.  We are all part of the circle of life, let’s live in peace and not in strife.